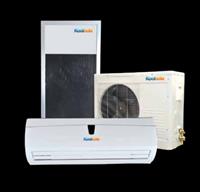 Here at Solar Power Cairns, we recommend using the KoolSolar as your first choice when it comes to solar air conditioning units.

The Koolsola Thermal Air Conditioning System improves on utilises the heat from the sun to add thermal energy to the refrigerant vapour which increases the difference in temperature between the refrigerant and the ambient air hastening condensation.

By using this method it reduces the superheat of compression required to achieve the cooling process in the conventional cooling system as well as utilising more of the cooling face of the condenser coil.

The conventional cooling system is only able to change a portion of the gas into a liquid state so that as it enters the metering device, or capillary, it is a saturated vapour.

The Koolsola Thermal Air Conditioning process allows more of the refrigerant to change state back into a liquid faster as well as allowing the transformation of more liquid into the metering device.

In a Koolsola air conditioning system the low pressure, low temperature refrigerant is compressed before gaining solar thermal energy in the heat exchanger of the solar absorption panel so that we now have both higher pressure and higher temperature vapour.

Then the vapour is condensed into high pressure liquid at ambient temperature by passing through the condenser.

The high pressure liquid is converted into low pressure, low temperature vapour at room temperature when it passes through the capillary before entering the fan head.

This is achieved by throttling and decompression of the liquid into vapour at low pressure and low temperature in the capillary. This phase change absorbs energy out of the room in the evaporator inside the fan head.

Air is blown through the condenser to distribute the cooling throughout the room. Moisture forms on the surface of the evaporator coil where it is piped away to the nearest storm water drain.

In the heating cycle the condenser and evaporator are reversed in sequence so that heat energy is released in the fan head instead of outside.