On 16 February 1999, the Queensland electricity industry was again restructured to improve governance arrangements and enhance the reliability of the State's electricity system. The main change was the amalgamation of the six regional distribution corporations into a single distributor corporation 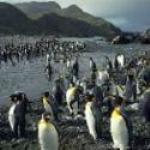